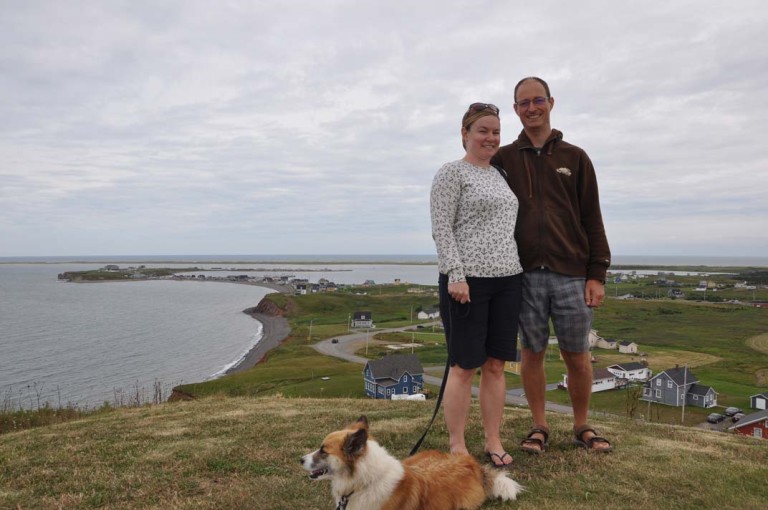 We sailed overnight from PEI to the the Isles de la Madeleine, or as the english refer to them, the Magdalen Islands.  The forecast East wind had a bit of a north component to it and there was a notable west setting current so we had to tack during the morning to make Havre Aubert, but with the sun out and a stiff breeze we were moving along well.  If it weren’t for my heavy foul weather gear and toque I almost could have been convinced we were making landfall at another caribbean island.

After having spent the better part of 2 hours tacking South east to make up for the west setting current, we tacked back to head North-East through the channel between Isle d’Entree and Havre Aubert.  For you sailing gurus out there I know I need to retension the halyard to make up for the stretch since putting in the reef, but at 25 degrees of heel, I wasn’t too eager to make coffee and that was deemed a higher priority.

Isle d’Entree offers some stunning landscape.  We may stop in at the end of our visit to go hiking.  Just depends on the weather.

We chose to anchor at Havre Aubert as despite offering no protection from the NE winds, the sandbar blocked all the waves, so it somewhat reminded me of one of the anchorages in Culebra.  I slept soundly in the 20 knot winds.  Either I was exhausted or I am quickly coming to trust our new Vulcan anchor.  Maybe it was a bit of both.

To the south of Havre Aubert is a big sandbar and miles of beach.  Here is Magnus trying to convince Chrissy to put both feet in the water.  In his mind 52F isn’t that cold.

They also have a large sandcastle competition.  We arrived too late to enter, and were rather tired from our overnight sail, so we waited until Sunday to check it out.  Overall, quite impressive.

A lot more elaborate than the ones I built as a kid.

Here is Chrissy sporting beach attire for eastern Canada, particularly when the winds are coming from the north.

And our miserable dog who I’m sure would rather we quickly return to the rat race and find dead end jobs for 60 hours a week while he is left home alone.

After the sandbar we head to the village.  Here Chrissy and Magnus wait patiently while I check out some menus at restaurants.  Although in hindsight I’m wondering why the one who doesn’t speak french was checking the menus while the one that does sits waiting.

A nice hotel for those that want to take the ferry instead of sailing.

Might have to take Magnus for a hike in the morning, the trail looks appealing.

The happy trio.  Sorry mom, I know my shorts and sweater don’t match, but I went out in public knowing it anyway. 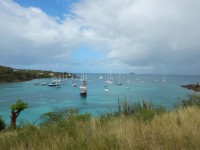 Unwinding in the Islands