We toured south through the Bras d’or Lakes which are a beautiful cruising ground that in many ways reminds me of our home waters on Georgian Bay.   We only spent a week here, but you could easily do a lot more.  The following are the top 5 similarities we found with Georgian Bay and our travel log for the trip:

And on to our travels:

We left Baddeck on a breezy sunny afternoon and not long after we had tucked into Maskell’s Harbour after a 7 mile sail.  We inflated the kayak for the first time in our travels this summer and enjoyed the long awaited opportunity.  We had intended to set off again the next morning but we we opted to stay for a second night as the weather was damp and rainy.

When we departed Maskell’s Harbour we sailed leisurely with the genoa the couple miles down to the Barra Strait bridge.  The bridge takes a long time to open, but the timing of the operator was great and we kept our approach at a speed of 5 knots and then sped up a little to get through as quickly as we could for the cars waiting patiently for us.  By the time the bridge was back down and the car traffic had resumed we were already well on our way as you can see in the photo.

As we neared the end of the narrows the land influence on the wind direction stabilized and we quickly raised the mainsail and on rolled the genoa.

Off we were on a beam reach, with the speedo seldom dipping below 7 for a good stretch.  For the non-sailors, beam reaching is one of the quickest points of sail, and a lot of fun and relaxing at the same time with a moderate breeze in protected waters.  Here I am trying to remember the last time we had fantastic reaching conditions and wondering how long the offshore leg from Hampton to the BVIs would take if we had this breeze the entire way.  The answer:  Just under 8 days.

Our destination for the night was Johnstown as the highway between Arichat and Sydney runs nearby and Chrissy was getting picked up for a bachelorette party.  Magnus and I enjoyed the start of the sunset and then I quickly scrambled around to get the bug nets on the hatches and we both took cover down below from the mosquitos.

Fantastic views along the shorelines seemed to the norm.

Of course when I went hiking with Magnus, he climbed back in the dinghy to find his frisbee.  Unfortunately we hadn’t brought it along.  So he went stick hunting and came up with a twig.  I laughed at him and then found a proper stick.  Well, a few minutes later he found this one.  He looked at the stick then at me, then he walked on figuring I would turn him down anyway.  Well, I had one extremely excited dog when I picked it up and tossed in the water.

Apparently Magnus is also part beaver and was thrilled.  He couldn’t get enough of this stick.  He is actually swimming nearly parallel to shore here as he struggles to turn it against the resistance in the water.  He liked it so much that it ended up making the 500 yard stretch from where we found it to where the dinghy was.

It was totally worth the struggle…

And of course once we getting ready to leave he hauled it up for safe keeping so he knows where to find it next time.

We ended up staying a second night as there was no wind all day, so we opted not to motor over to Marble Mountain.

Our last stop on the Bras d’or Lakes was Cape George, a few miles north of St. Peters.  Other than the youngster on the sea-doo that felt we made a good pylon for doing laps around it was a pleasant day at anchor.

Our last morning we motored down to St. Peters and transited the canal.

I was caught off guard by the kids that jumped in for a swim right after we passed by, and some tourists thanked us for passing through so they could see a boat go through the lock.

As we left St. Peters behind us, we found the forecast south west winds and had a roughest beat to windward.  A good reminder that we will definitely not be making the jump to New York when the south west winds are blowing 25 knots on the nose.

The highlight of this leg was  seeing some atlantic white sided dolphins.

And we arrived safely in Arichat harbour.  Now I am busy making sure Altera is ready for 2500+ miles that we need to cover in the next 2 and a bit months. 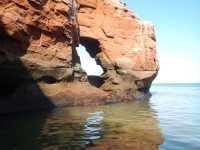 We have thoroughly enjoyed our time in Les Iles de la Madeleine and are really glad we made the trip.  It is a very unique…read more → 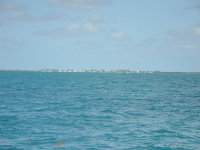 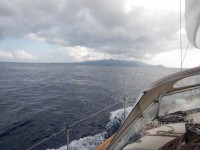