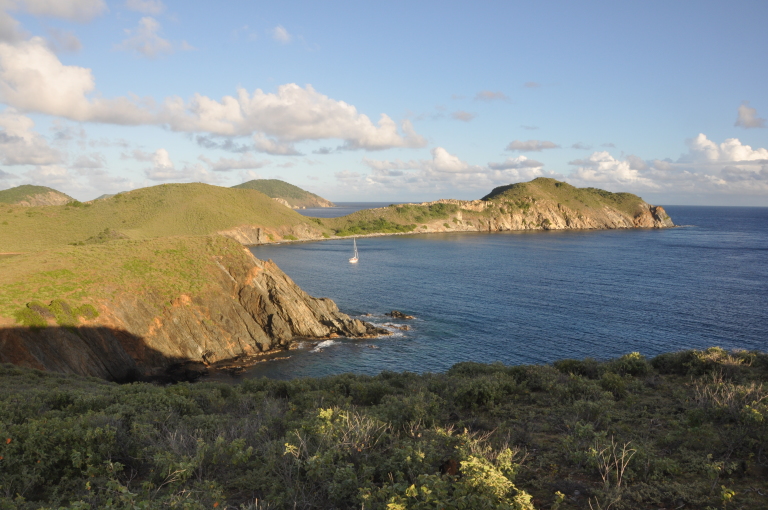 Wow, it’s been a bit since we had decent wifi to upload pictures, so finally here is an update on where we’ve been .

We departed the North Sound nearly two weeks ago headed for Cooper Island, but when we arrived the mooring field was full and while we had planned to anchor, there was no space left if we were to avoid the grass where numerous sea turtles live and you aren’t supposed to drop the hook.  So we high tailed it over to Peter Island as it was getting late in the afternoon and anchored there in a relatively peaceful anchorage, although we had a bit of a roll through the night.

The next morning we waited for a few squalls to pass and then sailed in to Soper’s Hole basically surfing along through the Sir Francis Drake channel with strong winds and following seas allowing us to make great time.  Unfortunately the listed place to drop anchor in Soper’s Hole seems like it has since been filled with mooring balls so we picked up one up and later decided we would spring for the night so we could browse around and stock up on groceries without rushing to get out and find a spot to anchor before night.  When we pulled in we passed a German couple on their Hallberg Rassy 40 that were just preparing to leave and I’ll admit I was tad envious as that is probably the closest thing to my current view on a perfect boat if you could get one without teak decks.

The next day we left just after lunch and headed for the Bight at Norman Island, which is a very protected anchorage and found a place to drop the hook for a few days.  Norman Island is reported to be part of the inspiration for Robert Louis Stevenson’s book Treasure Island and reportedly treasure has been found here, although our best efforts to find some more so that we can avoid the rat race for ever were not successful on this attempt.

In the morning we watched as all the charter boats rushed out of the anchorage to catch a quick snorkel while we swam off the back of the boat and took Magnus ashore.  Later on we took the dinghy around the corner to the caves and snorkelled ourselves one at a time while the other stayed with Magnus.  Following that we kept on going in the dinghy to the Indians to snorkel there.  We enjoyed that so much that we returned the next day in the dinghy to snorkel at the Indians again.

I decided one morning that I would take Magnus to the beach at the Pirate’s Bight restaurant and while we were roaming around behind the restaurant, we discovered a trail so we went for a hike.  We likely spent the better part of two hours hiking and I believe we stood atop of the ‘Spyglass Hill’ Pirates lookout although I didn’t realize at the time as it now has a helicopter pad up there.   As we hadn’t been expecting this hike, we returned the next morning so I could bring the camera along too.

On our second night we visited the Willy T, and upon our arrival one couple warned us (as they were departing) that the evening was going downhill as a group from one boat had been jumping off the boat and were preparing to do so again.  For those unfamilar with the Willy T, this jumping is very frequently done naked, and by the end of the night I can honestly say I haven’t seen that many people jump naked off the back of a boat before.   It must have been an anomaly for low season as we didn’t hear the cheers of the crowd that accompany the jumpers the other nights we were in the anchorage.  It is an interesting bar/restaurant and as we spent several days in the anchorage I enjoyed watching the noon rush from cruise ship snorkel tours, followed by late afternoon high time from the arrival of charter fleet and the evening party time.   I’ll admit I have a habit of trying to figure out the economics of many of these businesses, but suspect that the owners of the Willy T are making their own pile of Treasure in this cove.

When we finally left Norman Island, we raised the sails for a whopping 4 and a bit miles over to Little Harbour on Peter Island.  We anchored here as this is a short hop over to Road Town where we intended to go the following morning for groceries and boat parts.  This is a nice little anchorage and evidently is a common stopping point for crewed boats while they are between charters so we did a bit of socializing and gained some local knowledge as well as where I may be able to obtain parts for the autopilot.

Road Town wasn’t overly exciting, but we were on a mission and it was rather hot so we didn’t really play tourist.  They are expanding the cruise ship jetty, so for those of you who don’t like the cattle herding experience of being rushed on and off of a ship via tender in the tropical heat to get to ‘experience’ some feature of the area, not to worry you will soon be able to do by stepping off the boat but with twice as many tourists.  In the end we were successful in obtaining a lot of groceries, a new snap shackle for the furler and surprisingly a set of dinghy oars, so we made the short hop back to Little Harbour for the night.

Salt Island was up next and we anchored alone in the bay on the south west side.  It was great to have some peace and quiet, although it came at a price of having a rolling boat at anchor as some of the waves wrapped around the southern point.  We rigged up a swell bridle and it helped keep the bow in the swell most of the time and allowed us get some sleep that night.  All the greenery on the island is low, so Magnus and I explored the afternoon we arrived, including a tour of the salt ponds and then again the next morning.

Since then we have spent a night anchored by Buck Island, followed by a lunch stop at Great Dog and now we are back in the North Sound.  Yesterday Chrissy did laundry at Leverick Bay while I did a thorough clean of the galley, the head, vacuumed and rinsed the salt off our heavy foul weather gear with the remaining water in the tank.  We haven’t needed that gear since we crossed the gulf stream, so now that it is salt free we will stow it until next spring.   We spent the night at the Bitter End so we could get some wifi and are planning on heading to Anegada in the morning for a few days. 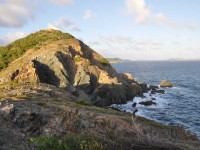 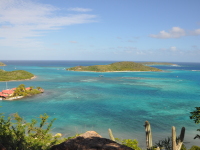 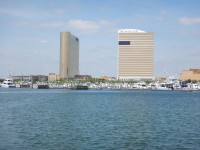