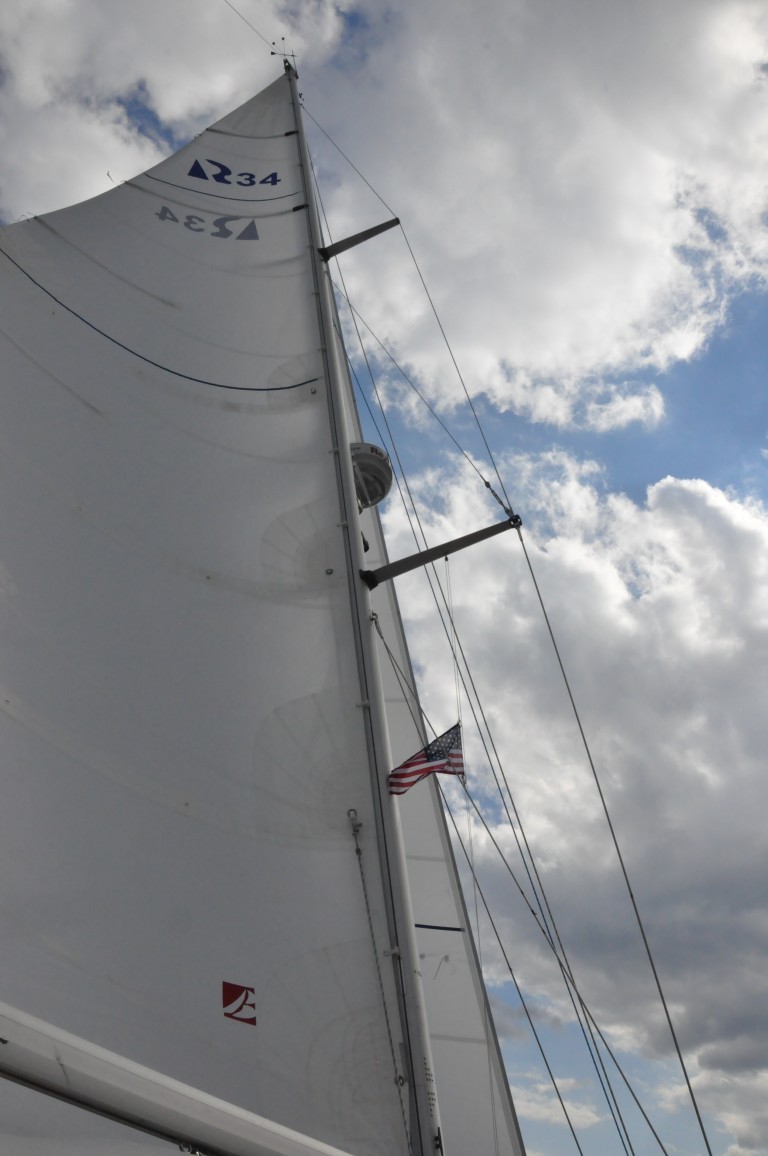 We left Waterford and entered the Hudson River at Troy, NY state a little over a week ago.  A short distance later we passed down through the Troy lock that will likely be the last lock we encounter for a while to come.  Below the Troy lock the Hudson river is tidal so we timed our departure to get a bit of a boost from the current.

It doesn’t appear as though Troy is a flurry of economic activity judging from some of the rough looking buildings on the waterfront.

There were no places to turn off near this location, but just in case you were wondering which way to go, they kindly marked the channel anyway.

Cool paint job.  I wonder if it serves as camouflage in wavy conditions.

The Barges on the Hudson River approach the size of the freighters on the great lakes.

Not long after passing this barge, he set off behind us.  We still had our mast on deck as we still hadn’t reached the marina where we could it get it put back up.  Then the wind picked up which I assume was due the landscape funnelling the wind straight at us.  Seeing as we had timed the current to help us down the river this put us in a situation with the wind opposing the current and we had a few steep waves up to 2′ tall.  In an ordinary day, this would be no big deal, but I’ve heard stories of people with insufficient mast supports losing them overboard.  We slowed down drastically just enough to maintain steerage and I added some extra lines to stabilize the mast just in case and got them on just in time for the wake from that barge.  The geography flattened out and so did the water a couple miles later and we made it down to Catskill without incident to get ready to have the mast stepped at Riverview Marine.

The next morning the mast went up and we went through the alignment and tuning that afternoon and then put the sails back on.  It was late in the day, so we stayed there a second night and the set off again the next morning.

A historic old mansion.  I think the eccentric former owner used it to store munitions at some time the past.  We anchored for the night on the opposite side of the river and Chrissy took Magnus ashore in the kayak while I took a turn cooking.

If my MASH history and military education is correct, West Point is where the higher level US army officers go to school.

Just how many barges can one tug push at a time?  I think I made out 7 when I was counting.  We gave him a wide berth as I doubt he could maneuver very well.

Look at the size of those fences.  Better not stop for swimmers just in case they escaped from Sing Sing.

We did motor sail at times on the Hudson and we were able to shut down the engine and sail past Haverstraw, but sadly most of the time the wind was directly up the river, on our nose.

We stopped just north of the George Washington bridge for the night and Magnus got his row ashore.  Getting back aboard Altera afterwards proved to be difficult with the strong currents at up to 1.5 kn.  We tested the anchor set extra well here and turned on the anchor alarm as well just in case the reversal caused a problem.  Fortunately it didn’t.

Here was the view we had after sunset.  We could hear the crickets chirping in the park next to us at night, but the dull roar of the city was still very audible.

The next morning we set off again debating whether to just head straight to Hampton to take advantage of the winds or to get a better nights sleep first.  Magnus assisted the decision as he picked up some ticks in the morning on our hike along the river and up the stair case to the top of the cliffs, so we went to Atlantic Highlands in New Jersey for a night and to grab some extra groceries and flea and tick shampoo.

Check it out Mom, you can visit Manhattan by boat too.

The buildings in the financial district definitely were in the best repair of all the ones we passed further upstream.

The winds were actually cooperating and were about the perfect strength for testing the tune on the rig.  Of course the first day I don’t shave on this adventure is the one Chrissy decides to take a picture of me.

Amazing how much further down that ship sits when fully loaded.

We had brisk 25 knot north west winds when we set off from Atlantic Highlands so we spent a little over an hour with a double reefed main and furled jib sailing to windward so that we could get out around Sandy Hook to the Atlantic.  A few other Canadian boats watched us leave the mooring field, but none followed.  Needless to say the camera was stowed below to keep it out of the salt water spray into the cockpit.  Once we rounded Sandy Hook we were flying along and saw speeds up to 8.6 knots.  Not bad for a 34′ boat with 2 reefs already in the sail.  We made good progress through the night and watched as Atlantic city went by in the distance.  The next morning the winds calmed down and we got the red sky in the morning.  Fortunately we also had a red sky the night before, so I figured I would trust the red sky at night, sailors delight from the night before.

The reefs came out of the main and then eventually the motor was added to supplement.  Then the winds build and we were again flying, but not on course as the wind was on the nose again.  As the waves and gusts built, we again progressed down to 2 reefs in the main and a partly furled jib.  We sailed all through the night and into the next morning like that.  Not particularly comfortable for sleeping, but we managed.  Our velocity made good was not very good either as the wind created about a 1 knot current against us.  Here is a snap shot of our tracks from the chart plotter.  It is pretty obvious where the winds were against us.

The winds lulled again the second morning and we motor sailed for a while, then we sailed for a while when the winds picked up and with the sun shining and the warm southerly winds for the first time since we set off there was a glimmer of hope that living the dream might actually entail sailing without the sailors equivalent to a snow suit on.  Later in the day the winds shifted a bit and tapered off but allowed us to motor sail the rest of the way to the entrance of the Chesapeake Bay, with the sails boosting the speed by about a knot.

As we approached we were seeing 2 knots of wind so I dropped the sails, Chrissy made dinner and we motored in towards Hampton.

We arrived at the dock in Hampton a little after 9 and realized that we would get to attempt our first docking stern to between pilings in the dark.  Fortunately the winds were light and it went well.  Magnus got a quick trip ashore and then the 3 of us had a great nights sleep. 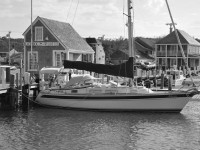 A Cold and Damp Leg to Martha’s Vineyard

We left Atlantic City mid-day in a gentle southwest wind.  The forecast called for the wind to shift NNW in the evening so we headed north of…read more → 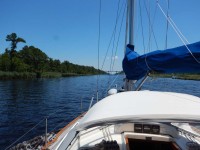 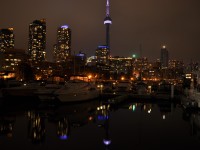 Last sunday we transited the Welland Canal.  We left the marina in Port Colborne with our extra crew of Chrissy's Parents and headed for the…read more →