Last week we were faced with a dilemma of a brief window to sail around Cape Hatteras with rather brisk winds on the stern and a high risk of thunder squalls or we could commit ourselves to 200 miles of the intracoastal waterway (ICW) instead.  We chose the latter, as Chrissy hasn’t done that stretch of the intracoastal, but if I was faced with the same dilemma again, I might just keep on waiting for better weather to sail on the ocean side.

The ICW itself is a popular route for sail and power boats to navigate up and down the coast and I can see how it can appeal to some.  However, this particular section is 200 miles.  Once you start in a sailboat you are committed to at least 4 days.  In comparison it takes about a day and a half to sail from Beaufort to Norfolk.  In our case, there was a chance that the weather would be suitable after 4 days of the ICW to jump back into the ocean and keep going, so we had to target 50 mile days.  As it turned out, the forecast degraded, but our AT&T was not in reach of cell towers during our swamp travels, so we had no idea that the weather we were hoping to capitalize on was quickly disappearing from the forecasts.

This means your trip involves finishing your days in this sequence:  swamp, swamp, Coinjock dock or swamp, Norfolk.  As we are northbound, the reason we weren’t sailing on the ocean was because we had north winds which would oppose the gulf stream, a messy situation.  But, on the ICW the wind would still be northerly, so although most of the route can be sailed with the right wind direction, we found ourselves motoring into the wind as there isn’t enough room to tack back and forth.

So, if you want to d0 the ICW and have it enjoyable, this section should really take 8 days.  Then you can have stops in Oriental, Belhaven, swamp, Coinjock, Great Bridge, Portsmouth and have a day or two to wait out the adverse winds so you can really get the most out of the sails.  Should I ever plan to do the ICW extensively, 25 miles a day would be my maximum average daily target when making progress plans.  Then you can let the sails do their thing, if the wind lulls a bit you still have lots of time to get there before you contemplate firing up the engine, and you have time for a quick look around at the place you stop.   I can’t help but think that perhaps a trawler is the way to go on the ICW if you are adamant to be on a schedule.

Between the extensive swamp sections and narrow man made ditches there are still things to see if you allow yourself the time.

Slow season for the shrimp dock, but you can tie up for the night for rates we haven’t seen since PEI last summer.  We just passed on by though.

Here we are starting into over 20 miles of man-made ditch.  I said to Chrissy, I bet the bridge here is the highlight of the next 4 hours but I would be proven wrong.  The southbound sailboat was able to make use of the north winds.

The deer turned out to be the highlight of this stretch!

Another bridge and a slight bend in the canal!

As we were just about across the Abermarle Sound, a 49′ trawler hails me on the radio heading in the opposite direction to ask if I’d just come across from the Alligator River.  He was trying to get there but wasn’t sure he was on the right heading.  I helped the guy out and gave him some bearings, but couldn’t help but wonder how the heck you can get yourself in a trawler of that size and not have the ability to lay a course across from the last marker across the 8 mile stretch.  Fortunately for him there are no hazards other than about 1000 crab traps to avoid.

The typical ICW channel marker is a piling with the red or green navigation aids partially obscured by a birds nest.

I had done this stretch of the ICW a few years ago while helping to deliver Compass Rose X, and so I insisted we stop in Coinjock.  Basically the marina is a 1200′ long dock in a very, very small village with a restaurant that is famous for their generous servings of prime rib.  After 2 nights anchored in swamps where we couldn’t even land a dinghy, it was time to walk around, and I knew from last time the prime rib was really good.  I’d forgotten that it was also big enough to remind me that I’m not 21 anymore.

The last time I passed through this dock was full from one end to the other with about a foot between boats and even a couple rafted alongside.  For us, there were only 6 or 7 boats.  High season was a month ago for the northbound boats.

On what was supposed to be our final day on the ICW we pulled off at Great Bridge, 12 miles south of Norfolk.  They have a free town wall and I figured it would be better to tie up for a half an hour while waiting for a bridge opening rather than sit in the waterway idling.  I checked the weather as we were contemplating continuing overnight to Ocean City, but the latest forecast showed we would be sailing through heavy rain overnight and thunder.  This trip is supposed to be fun, and that didn’t sound like fun so we stayed there.  And then two more sailboats pulled in.  We all wandered over to the grocery store and we ended up having a potluck that evening.

The next day, the three of us set off to get through the bridge and lock sections on the final stretch to Norfolk and pulled into another free town dock in Portsmouth and had another potluck before making a lame attempt at pub crawl.

The final approach to Norfolk includes passing a very large naval base.  I think this is the G. H. W. Bush, one of the more recent carriers.  The Oasis of the Seas cruise ship is 94′ longer.

All these cranes are for part of the naval base, not commercial docks.

Portsmouth has a picturesque downtown and beyond that is a tidy but quiet town.

You can even go shoe shopping on the main street.  Hot tip though, if you want to go cruising before a traditional retirement age, I highly recommend skipping layaway and financing when it comes to shoes, furniture and lawnmowers.

And here we are docked in the town of Portsmouth with our flotilla for the last 12 ICW miles.  Norfolk is on the opposite side of the river. 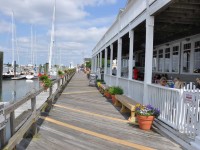 We had a successful first leg north from the Bahamas covering some 480 miles in 82 hours to Beaufort, NC.   We generally had gentle…read more →